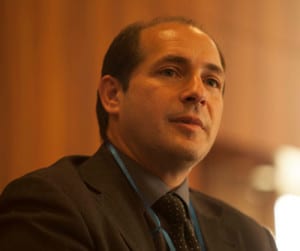 Rabbi Tom Cohen was born and raised near Portland, Oregon in the USA. During his studies at Portland State University, he became more and more interested in religious philosophy and the question:  “what does it mean to be Jewish?”

He continued his undergraduate studies in Los Angeles, California at the University of Judaism, where he received his Bachelor of Arts in Jewish Studies.  With the encouragement of Rabbi Marshall Meyer z”l and under the influence of Rabbi Elliot Dorff, he decided to pursue the rabbinate.

Over the next six years, he continued his education in Los Angeles, where he received another degree in Hebrew Literature, followed by two years in Jerusalem. Finally, he moved to New York City, where he completed his Master in Hebrew Literature. In 1991 he was ordained under the auspices of the Jewish Theological Seminary.

Rabbi Cohen arrived in Paris in the winter of 1992 and has never looked back. In 1993, along with a handful of families, he founded Kehilat Gesher, the French-American synagogue of Paris.

Despite all the challenges involved in representing a stream of Judaism that is still not yet well known amongst French Jewry, Rabbi Cohen loves working here in France, participating in the construction and development of an open, tolerant and egalitarian community—proof that Liberal Judaism can provide meaningful answers to the unaffiliated, and under-affiliated, Jews of France.

For Rabbi Cohen, being a congregational rabbi is the ideal job. “I spend my days connecting people back to their heritage—helping them take a second look, or at times, a first ‘real’ look at their Judaism,” he says.  “I help them delve into the deeper meaning of the Jewish vocabulary of prayer, study, acts of tzedakah (justice) and Hessed (deeds of gratuitous generosity), ritual, and helping people by means of tikkun olam (repairing the world).”

Rabbi Cohen is especially gratified by the time he spends one-on-one with congregants, hearing what inspires them, what they believe in and hope for, what troubles them, what keeps them going during difficult times and how they share life’s good moments. He is grateful to Kehilat Gesher’s members for inviting him into their lives, homes and families.

Rabbi Cohen is married to Rabbi Pauline Bebe and the father of four teenagers and young adults.

He hopes you will take the time to meet him and get to know the wonderful people who make up the synagogue that we affectionately call: “KG.”

Events of the Day